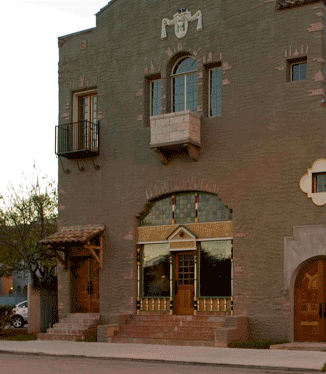 Built during the Florida land boom of the mid-1920s, the three-story Sarasota Times building is located at 1214- 1216 First Street. The building was designed by nationally known architect Dwight James Baum and was constructed by Ricketts and Hayworth to house the Sarasota Times Newspaper. It was one of the first concrete structures built in Sarasota. The building is a three story, asymmetrically-massed commercial block constructed over stucco and cast concrete over a concrete frame and hollow clay tile curtain walls. The original rendering of the building was a four level design with a central barrel tiled, hipped roof tower. The building was designed in the Spanish Colonial Revival Style, typical of boom time construction in Sarasota.

Over the years the building has been the address of many artists including Syd Solomon, Larry Rivers, Bonnie Bell, M. Hathaway, Robert Larson, and William Hartman, as well as, several architects. The University of Southern Florida rented the top floor for awhile for their Art Department. The building was allowed to quietly deteriorate as the boom of the past decade transformed downtown Sarasota all around it. Don and Lisa Murphy “rescued” the building and spent a year restoring the exterior to its original condition: repairing the cupola, balcony, and mansard roofs and replacing the original steel windows with exact replicas manufactured in New York.